John Koerner: The Hidden Side of Nature 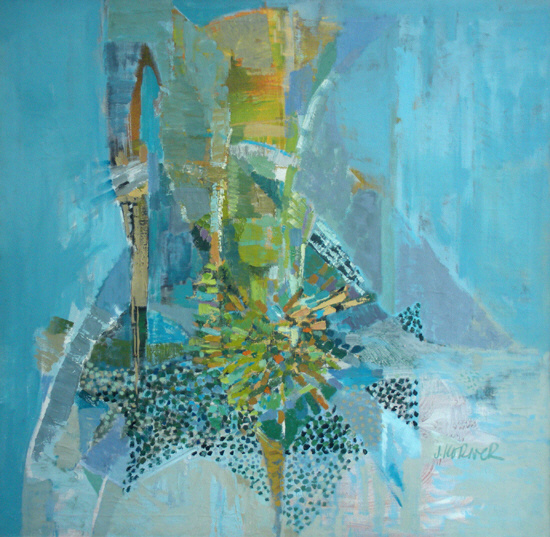 The Penticton Art Gallery invites you to the opening of their upcoming exhibition: "John Koerner, The Hidden Side of Nature", a retrospective survey featuring over 70 years of art in celebration of the artist’s upcoming 100th birthday. The exhibition opens at the Penticton Art Gallery, on Friday September 20th from 7 – 9 p.m. and the artist will be in attendance. John Koerner will also be giving a public talk on his incredible life’s journey and his amazing artistic output on Saturday, September 21st at 1 p.m. Both events are free and open to the public. The exhibition continues through Sunday November 3rd, 2013.

Throughout Canada’s relatively young history there are few artists who can claim that they have made their living off the proceeds of their art, and fewer still who can proudly proclaim that they have done so for close to seven decades. Quickly approaching his 100th birthday on September 29th, John Koerner has done just that, and he continues to paint, creating dynamic works which continue to surprise and draw interest and new fans from the arts establishment and the public alike.

This exhibition brings together over 50 major works borrowed from private and public collections from across the province. Collectively this collection of work provides a unique window into the artists’ creative process over the past 75 years documenting and illustrating his creative process and evolution. This provides the public and scholars alike with a rare opportunity to see firsthand the incredible scope and the prodigious output of work created over the course of John Koerner’s remarkable career.

As the oldest active member of the Vancouver School of Art, John Koerner was part of a group of artists whose work collectively has become known as west coast modernism. Working both as a teacher and as an actively exhibiting artist, with dozens of major exhibitions across North America and internationally under his belt, John Koerner’s influence on the development of British Columbia’s art history is undeniable.

It’s also remarkable to consider the incredible history which he has been directly associated with over the course of his life and it would be hard to dismiss the importance of his friendships with those he knew well and counted amongst his colleagues and closest friends including: Lawren Harris, Gordon Smith, B.C. Binning and Jack Shadboldt, to name but a few.

This exhibition not only reflects the breadth of Koerner's career, but it also parallels the colourful history of Vancouver’s visual arts community as it came into maturity in the 1950’s and 60’, firmly establishing itself as a major cultural hub in Canada and the Pacific Northwest.

His work is renowned for its luminous colours, ability to capture light and the meditative, joyful spirit that it evokes. Koerner has always maintained an optimistic approach in his work: "Early in my career I decided what the general direction of my work should be, and that despite the horrors and disasters in this world, it would celebrate all positive values," says Koerner.

Born in the former Czechoslovakia on September 29th, 1913, John Koerner began painting when he was only four years old. He studied under Fritz Kausek in Prague and with Victor Tischler, Othon Friesz, and Paul Colin in Paris before moving to Canada with his family in 1939 in advance of the Nazi occupation of Europe.

In addition to maintaining an active painting career, Koerner taught drawing and painting at the Vancouver School of Art and the University of British Columbia. His work has been featured in more than 50 solo and group exhibitions nationally and internationally, and can be found in dozens of collections across Canada and around the world, among them the Vancouver Art Gallery, the Tokushima Museum in Japan, the National Gallery of Canada, and the Tate Gallery in London.

If you are interested in acquiring an available artwork of John Koerner's, contact Ted Lederer:
ted@elliottlouis.com or by phone, 604-968-3132.

The Garden of Eden: Opus 1