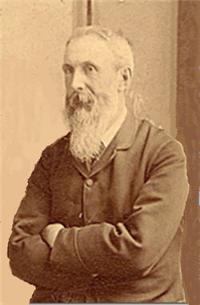 Marmaduke Matthews was born in 1837 at Barcheston, Warwickshire, England. He was educated at Oxford, came to Canada from England in 1860, and settled in Toronto. Matthews was a charter member of the Ontario Society of Artists, and in 1894, he was elected its president. In 1880, he was chosen as a charter member of the Royal Canadian Academy of Arts, and was appointed its first secretary by the Governor General, the Marquis of Lorne. Matthews is best known for his landscape paintings, and he was one of the earliest and most successful artists to paint the Rocky mountains. William Van Horne, one of Canada's greatest art collectors and president of the The Canadian Pacific Railway, commissioned several artists, including Matthews, to follow the construction of the railway west, and draw the landscape along the way. This project began in 1888, and every summer for a period of ten years, Matthews would return to the Rockies to paint the landscape. These paintings brought Matthews acclaim as an artist, but they never brought him wealth. He died in Toronto in 1913.