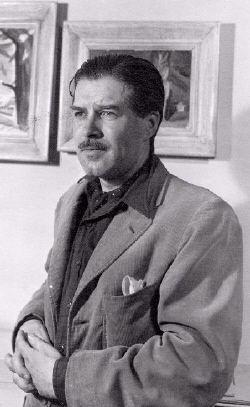 Jack John Hamilton Bush was born in Toronto, Ontario on March 20 1909, but he spent most of his childhood in Montreal, where he studied at the Royal Canadian Academy. Here he was schooled by Adam Sheriff Scott and Edmond Dynnet from 1926-1928 in the basic principles of art, and he was very skilled.

As a twenty year old man, Jack began his professional career as a landscape artist in 1929. At first he painted mostly landscapes and was clearly influenced by the Group of Seven. Early in his career, Jack Bush was particularly inspired by the work of Charles Comfort, who was to become one of his instructors at OCA.

During the 1930s, when Jack was in his twenties, he ran a commercial art business in Toronto by day, and at night he advanced his studies at the Ontario College of Art. Fredrick Challener, John Alfsen, George Pepper, Charles Comfort and J.E.H. Macdonald, instructed Jack Bush in the principles of modern art from 1929 (Comfort's sketch classes) right through to 1939.
The Group of Seven disbanded in 1932 and Jack was invited to join the Canadian Group of Painters in 1933, and he accepted the invitation. Like most of his contemporaries, he painting in relative isolation and developed new techniques. It wasn't until the autumn of 1949, when Jack Bush was forty years old, that he hosted his first solo show at the Gavin Henderson Galleries in Toronto. Although Jack Bush painted large-scale abstract paintings in the early 1950s, he did not fully develop his signature style until later in the decade when he became part of a prestigious club called Painters Eleven, which was founded by William Ronald in 1954 to promote abstract painting in Canada.

Clement Greenberg became a mentor to Bush and encouraged him to refine his palette, technique, and approach. Jack was encouraged to abandon his Abstract Expressionist style characterized by hovering amorphous shapes on the picture plane. He would simplify his composition by using an all-over coverage of thinly applied bright colours inspired by his watercolour sketches. As a result of Greenberg's guidance, Bush became closely tied to two movements that evolved from abstract expressionists: Color Field Painting and Lyrical Abstraction.

After Painters Eleven disbanded in 1959, Jack Bush went on to enjoy a successful career as a respected artist in Toronto. He represented Canada at the 1967 São Paulo Art Biennial, after which his art found great commercial success in New York City. He was eventually honoured as an Officer of the Order of Canada in 1976, and the Art Gallery of Ontario toured a large retrospective of his work that summer. It should be noted here that Jack's work is based on an abstract record of his perceptions. He did not expect the viewer to see the flower, or hear the music that inspired the art, but to share the emotion of the experience through his painting. Jack Bush died at the age of 68 in 1977 and two years later, in 1979, the National Film Board of Canada released a one-hour documentary film titled simply 'Jack Bush'.