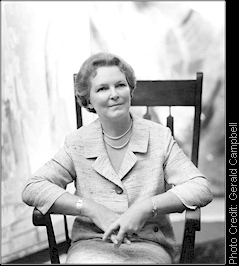 Born in Montreal in 1901, Alexandra was torn from childhood between an ardent desire to study art and an almost missionary zeal to be a nurse. As she and her twin sister wanted the same profession, nursing won out. She graduated from the Columbia Hospital for Women in Washington, D.C., followed by marriage to Mr. Ewart McLaughlin, and a family. This period in Alexandra's life was an exceptionally busy one. She was involved in many community activities, as well as continuing her painting as a hobby. Founder of the Oshawa Skating Club, charter member of the Historical Society, Chairman of the House Museum Committee, she was also active in the Women's Art Association, the Women's Welfare League, the Helic-Club of Toronto, the CNIB and the Victorian Order of Nurses.

Alexandra's first exhibit was sponsored by the Lyceum Club and Women's Art Association in 1933. However, it was not until 1945, when she attended a summer school at the Banff School of Fine Arts, under Jock Mcdonald and A.Y. Jackson, that she finally gave full vent to her artistic desires. Her natural talent was very evident at the school . . . from 1500 paintings completed by the class, 65 were selected for a cross-Canada tour, and besides having one of hers chosen for this, Alexandra had a painting added to the Banff shool's permanent collection. After this initial encouragement, Alexandra studied for three summers between 1947 and 1950 under abstractionists Hans Hoffman, in Provincetown, Massachusetts. In 1953 Painters Eleven was formed at Alexandra's studio at Thickson's Point. Barely eight years after she began painting seriously, this Ontario housewife had become a leading spirit in the dynamic avante garde of Canadian art. She has exhibited with the Ontario Society of Artists, the Canadian Group of Painters, the Royal Canadian Academy and Printers Eleven . . . in Canada, the United States and Paris. At the Perry Institute in Florida, one of her pictures was selected for the Hall of Fame. In 1960, Alexandra Luke was elected as Life Fellow of the International Institute of Arts and Letters, an elite organization limited to 750 members throughout the world. At the time, the organization included names such as Marc Chagall, Aldoux Huxley, Jean Cousteau and Daphne DuMaurier.