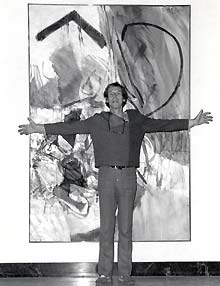 Thomas Sherlock Hodgson was a painter and commercial artist who was born in Toronto, Canadian 1924, where he lived most of his life.  He died in Peterborough, Ontario in 2006. His mediums were oil, acrylic, watercolor, gouache, silkscreen, charcoal and mixed mediums.  His subjects were non-objective abstracts, landscapes, nudes, figures and portraits.  His styles were abstract expressionism, lyrical abstraction, realism and pop art.

In the 1950s, Hodgson and two of his Central Tech classmates, Kazuo Nakamura and Harold Town, were among a group of similarly minded Ontario artists who were growing increasingly frustrated with Toronto's stuffy cultural and artistic establishment.In October 1953, Hodgson and Nakamura took part in an interesting exhibit spearheaded by one of their painter colleagues, William Ronald, who also did window displays for the former Simpsons department store in downtown Toronto.
Hodgson was also a member of the Ontario Society of Artists (1954), the Canadian Society of Painters in Water Colour (1954), the Canadian Group of Painters (1956), and an Associate of the Royal Canadian Academy (1962).  It should also be noted that during the Second World War he served overseas with the Royal Canadian Air Force.

His work has been exhibited in over 50 major solo and group exhibitions from the early 1950's to 1995.  These include four Canadian Biennials at the National Gallery of Canada (1955, 57, 59 and 61); the Smithsonian U.S.A. Tour  (1956 – 1957); a two-man show with Graham Coughtry at the Montreal Museum of Fine Arts in 1960; the Canadian Biennial in London, England (1963) and the Painters Eleven Retrospective traveling exhibition (1978 – 1981).  He also exhibited with the Royal Canadian Academy from 1952 to 1966, and with the Montreal Museum of Fine Arts from 1954 to 1963.  In addition his work has been exhibited in many other locations such as Mexico City; New Delhi, India; New York City; Louisville Kentucky and at the Carnegie International, Pittsburgh, Pennsylvania.