Just as his Paris street scenes brought him tremendous success during his lifetime, Cortes continues to captivate art-lovers today and is considered to be one of the masters of French impressionism.

Edouard Cortes, of French and Spanish descent, was born in France in 1882. As an adolescent, he became fascinated with the arts and at seventeen began his studies at the Ecole des Beaux-Arts in Paris.  At the artist's first exhibition in 1901, a dramatic Paris street scene at dusk brought him immediate recognition.

With bold brush strokes and intriguing colors, Edouard Cortes expresses the romance, vivacity and charm of old Paris.  His works display an intense insight into perspective, composition and intriguing details – the play of lights on wet pavement, shadows on streets and glowing windows and street lamps. On any one of Cortes' canvases, with an array of tones ranging from soft gray hues and ambers to vivid reds, yellows and oranges, the overall effect of the artist's composition is magnificent.

Capturing the magic of Paris during its transition from the romantic belle epoque to the modern, twentieth century capital as we know it, Cortes has left the world a legacy of master paintings. Now found in most prestigious collections throughout Europe, the United States, Canada, Great Britain, Australia, South America and Japan, his work continues to awe the world. 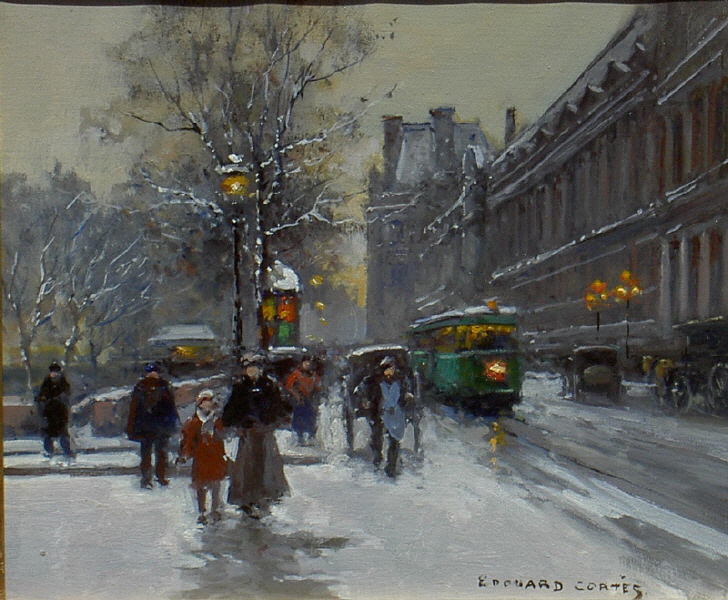