Russian-born Canadian Painter, 1895-1978.  Nickola (or Nicholas) de Grandmaison was born in Russia in 1892. He fought in the Russian army during WWI and spent time as a prisoner of war. Making his way to England, following the war, he studied at the St. John's Wood Art School in London. He immigrated to Canada in 1923, and settled in Banff, Alberta. Wishing to discover more about his adopted country and looking for artistic inspiration, de Grandmaison often traveled from his home in the mountains to the prairies. On the road, much of the time, he soon set aside his oil paints in favour of pastels, which, he found better suited his travels. He found his subjects among the native people he sought out along the way. He developed tremendous respect and admiration for the native peoples of North America, and eventually visited reservations all across the Canadian west and as far south as Arizona. An example of the rapport he had with his subjects: he was the only artist able to persuade High Eagle, the last surviving warrior of the Custer massacre, to sit for him. When asked why he preferred to paint native indians, he commented, "They sit quietly and pay attention when you are drawing them...the white man says, 'well okay, draw me: I'll give you 15 minutes now and 15 minutes later.' looking at his watch." He also stated, "...to me it is a great honour...they have colour, character and history in their blood". This statment inspired the title of a book which records 64 pastel portraits painted between 1930 and 1960. History in their Blood, by Hugh Dempsey, was published in 1982 by Douglas & McIntyre in Vancouver and Toronto. De Grandmaison passed away in 1978. His work is represented in the National Gallery of Canada and his honors include an associate membership in the Royal Canadian Academy and the Order of Canada. 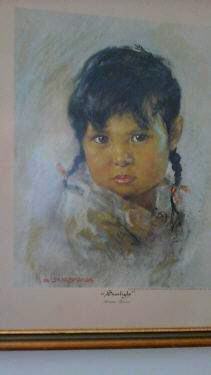