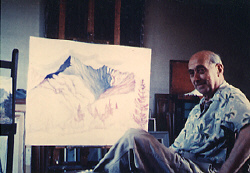 Weston was the first painter in the west to be elected an Associate of the Royal Canadian Academy. He became an original member of the Canadian Group of Painters, formerly the Group of Seven. He was made a life-member of the British Columbia Society of Fine Artists, after he completed a seven-year term as president. He taught other successful Canadian artists, such as Gordon Smith. In the 1930s and 40s, Weston's imaginative interpretations of British Columbia were both celebrated and controversial. Weston was considered avant-garde at that time, but by the 1960s, tastes changed and new styles of visual art emerged. The abstractionists became the next major movement, but Weston resisted the turbulent changes of the art world. He believed art should be somewhat representational and continued to paint landscapes in his own, distinct style.

The most remarkable aspect of W.P. Weston is the passionate drive to know every inch of the mountainous, coastal landscape at the core of his paintings. The real measure of Weston's success is how powerfully he interpreted British Columbia through his art, with sound technique, imagination and idealism.

Weston's paintings are held in major collections, such as the National Gallery of Canada in Ottawa, the Vancouver Art Gallery, Hart House, the University of Toronto, and the University of British Columbia. His work has been exhibited in London and at the World's Fair in New York. He was one of the first BC artists to have a solo exhibition at the Vancouver Art Gallery, after Emily Carr and Thomas Fripp.