Takao Tanabe, born in 1926, Interned with his family and other Japanese-Canadians in the BC interior during the Second World War, his art studies included the Winnipeg School of Art (1946-49), Hans Hofmann (1951), Central School of Arts and Crafts, London, England (1954), and Tokyo University of Fine Arts (1959-61), where he combined painting and calligraphy with travel in Japan. He worked in Vancouver as a graphic designer (1956-59) and established Periwinkle Press (1963). He began teaching at the Vancouver School of Art in 1962. He regularly exhibited his paintings throughout Canada and did murals on commission. In 1968 he left for Philadelphia; from 1969 to 1973, he painted in New York. He was head of the art department at the Banff Centre 1973-80.

Tanabe continues to paint the landscapes of the West Coast, the Arctic, deserts and the Prairies. His paintings and prints, in a variety of media including lithography, etching, woodblock and photogravure, are exhibited regularly in galleries in Vancouver, Calgary and Toronto. In 1992, his work was included in the National Gallery of Canada's "The Crisis of Abstraction in Canada: The 1950s" and the Winnipeg Art Gallery's "Winnipeg: Achieving the Modern." In 1996, Tanabe's 70th birthday was marked by exhibitions of his work in Toronto (Mira Godard Gallery), Calgary (Paul Kuhn Fine Arts Gallery) and Vancouver (Equinox Gallery.) In 2005, a retrospective exhibition entitled Takao Tanabe was organized by the Art Gallery of Greater Victoria and the Vancouver Art Gallery and toured nationally. Takao Tanabe was made a Member of the Order of Canada in 1999 and received a Governor General's Award in the Visual and Media Arts in 2003. 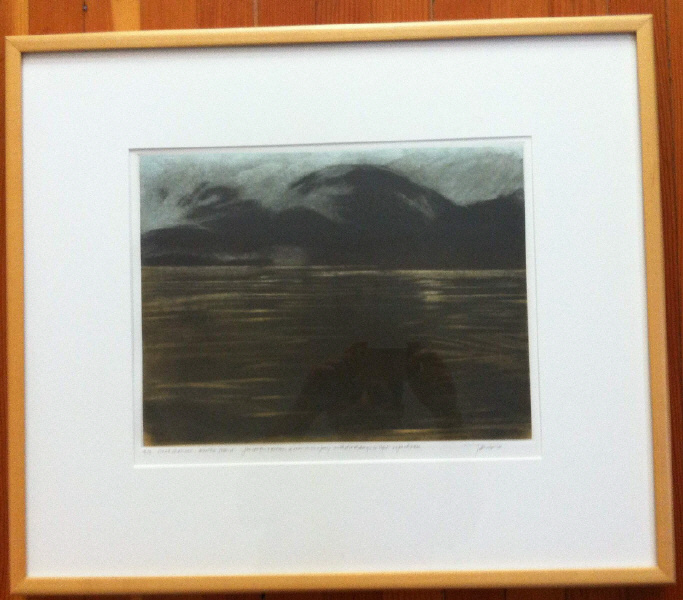 inscribed in pencil at bottom:
For John and Eileen, a memento of my 70th birthday,16 Sept, Regards Tak
signed, bottom lower right