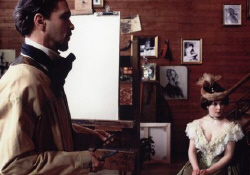 Marc-Aurele de Foy Suzor-Cote was known both as a painter of landscapes and figures and as a  sculptor. Born at Arthabaska, Quebec, his mother was Cecile de Foy-Suzor and  was his father Theophile Cote. He began by helping the painter Maxime Rousseau to make church decorations at Arthrabaska.

In 1890 he travelled to Paris where he studied at the Ecole des Beaux-Arts and at the Julian and Colarossi academies, returning to Canada in 1893. He was again in France in the eighteen-nineties, returning to open a studio in Montreal in 1908. He spent the summers painting at Arthabaska. In 1911 he was elected into the the A.R.C.A. and  in 1911 into the R.C.A. He died at Daytona Beach, Florida, where he had gone for his health.