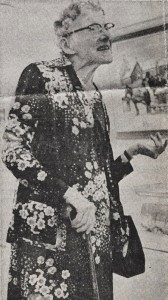 1893-1986 Kathleen Moir Morris, born in Montreal, studied at the school of the Art Association of Montreal (1910-1918) under William Brymner and made sketching trips with Maurice Cullen. She had lived mostly in Montreal except for a period in Ottawa, 1922-1929. A.R.C.A. in 1929.
A painter of landscapes and lively street scenes, often animated by the presence of humans and animals, Kathleen Moir Morris met with considerable success during her lengthy career as an artist. After studying under William Brymner and Maurice Cullen, Morris became a member of the Beaver Hall Hill Group and exhibited frequently in Quebec and Ontario with the Royal Canadian Academy, the Montreal Spring Shows and the Ontario Society of Artists. Except for a short stint in Ottawa (1922-29), she lived her entire life in Montreal and its environs, frequently depicting scenes of urban life in warm colours, with an eye for the humane, the charming and the joyful. She was an admirer of the work of J.W. Morrice. Her work has been shown all over the world, in exhibits such as the British Empire Exhibition, Wembley, England (1924-25), the Exposition d'art canadien, Musée du Jeu de Paume, Paris, France (1927), Canadian Art at the British Empire Trade Exhibition, Buenos Aires, Argentina (1931), Pintura Canadense Contemporanea, Rio de Janeiro, Brazil (1944), and many more. She was elected to the Royal Canadian Academy in 1929 and received honourable mention at the Second Willingdon Arts Competition. Her work can be found in the collections of the Art Gallery of Greater Victoria, the Art Gallery of Hamilton, Hart House at the University of Toronto, the Mackenzie King Museum, the Montreal Museum of Fine Arts, the National Gallery of Canada, the National Archives of Canada, and the Canadian Legation in Paris.