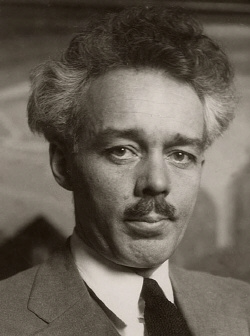 1885-1970 Lawren Stewart Harris, born at Brantford, Ontario. Entered the University of Toronto in 1903. Turned to painting and studied in Munich and Berlin, 1905-1907, and travelled in France, Italy, and England. In 1909 he visited Palestine and Arabia, making illustrations for Harper's Magazine and Norman Duncan's Going Down from Jerusalem; also visited lumber camps in Minnesota to make illustrations for Harper's. Returned to Toronto in 1910. First sketched in Northern Ontario in 1912 (with J.E.H. MacDonald). With MacDonald he was influenced by an exhibition of Scandinavian art which he saw in Buffalo in 1913. A moving force in the national movement in painting, he encouraged MacDonald and Thomson to paint full-time and with Dr J.M. MacCallum built the Studio Building, Toronto, in 1914. Original member of the Group of Seven, 1920. Painted in northern Ontario, the Laurentians, Nova Scotia, Newfoundland (1921), the Rocky Mountains (1924), the Arctic (1930), and the Gaspe (1932). Founding member of the Canadian Group of Painters, 1933. Member of the Transcendental Painting Group in Santa Fe, 1940. Moved to Vancouver in 1942. Since about 1940 he has worked in an abstract, expressive style. LL.D. (British Columbia) in 1946, (Toronto) in 1951. Trustee of the National Gallery of Canada since 1950.