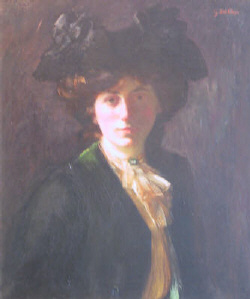 1890-1968 Alice Des Clayes, born in Aberdeen (Scotland). She was the youngest sister of Berthe and Gertrude Des Clayes. She studied at the Bushey School of Art; at Newlyn; and at Ambleteuse with Dudley Hardy. She came to Canada in 1914 and was active at Montreal.A.R.C.A. in 1920. Later she returned to England and lived in Newton Abbot, Devon.

Alice Des Clayes is best known for her animal and rural genre scenes, the youngest of the Des Clayes sisters came to Montreal in 1914, after studying at the Bushey School of Art and the Newland School of Art in England. A regular exhibitor in the Royal Canadian Academy and the Montreal Museum of Fine Arts spring shows between 1914 and 1940, Alice was elected to the Royal Canadian Academy in 1920. Other distinctions include a reproduction of her work "Remounts" in Newton MacTavish's book "The Fine Arts in Canada" in 1925. Experimenting with a variety of media, she worked in watercolours, oils, pastels and coloured chalks. She returned to England in 1938. In Canada, her work can be found in several galleries, including the National Gallery of Canada and the Art Gallery of Ontario.