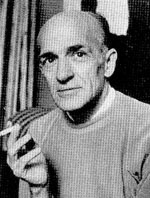 1905-1960 Painter, sculptor, Paul-Émile Borduas, was born at Saint-Hilaire, Quebec. He had his first lessons from Ozias Leduc and later studied at the Ecole des Beaux-Arts, Montreal. In 1928 he went to Paris and studied at Maurice Denis's Ecole d'Art Sacre, and with Jean Hebert Stevens, Paris, 1929, returning to Canada in 1930.  At about this time, he was influenced by the theories of surrealism advanced by Andre Breton. Taught for a time at the Ecole de Meuble, Montreal. In 1948 the Automatistes, of whom he was leader, published their first manifesto, Refus global.  Borduas lived in New York, 1953-1954; later living in Paris where he died in 1960.