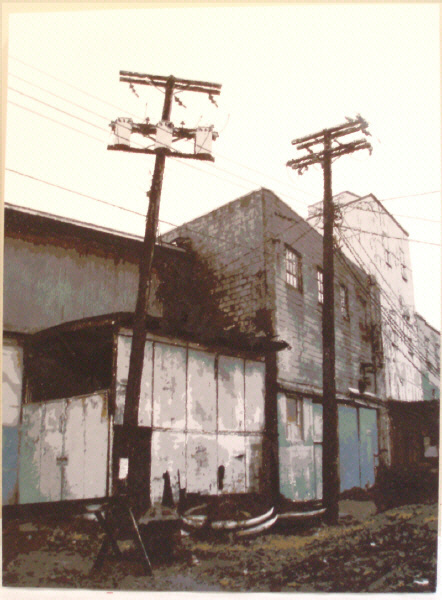 From "the dark" comes Light

Devitt Brown, known professionally as "the dark," was anything but last evening at the opening of his unique and curious work presented by the Elliott Louis Gallery in the courtyard of the Arthur Erickson-designed Waterfall building. It was a fitting location for this former graffiti artist who has lived on the street and uses abandoned buildings and other urban detritus as a common subject for his palette.
This elegantly poised young man stood tall and quietly dignified in his tuxedo, rented for his coming-out. This begged the question, posed from one of the many admirers who had gathered in celebration of this popular graffitist, "where was his art before his first stencil upon the city's streets?
The answer is a telling one, and where I choose to start my story of the evening and this emerging talent on the Vancouver art scene.
"Binder-art in high-school," was "the dark's" reply. Grenville Christian College, as it turns out. I was curious about this because of his manner, which was impeccable, and his deportment, equally so. All the hype about graffiti and living on the streets seemed incongruous with the elegance of his demeanour.
The Grenville Christian College is an elementary, middle and upper grade school in Brockville, Ontario. The school's mission is, "to care for their students; treat them with respect, and to encourage them to grow into caring, respectful, well-educated adults." They aim to educate young students academically, physically and spiritually, within a family environment, teaching personal responsibility and the value of excellence.
All of these qualities were readily apparent in "the dark," lending evidence that, by all appearances, they had accomplished their objectives with this former student.
The school motto: Copiosa Apud Eum Redemptio (In Him is Plenteous Redemption), lends a colourful theme to the recent trajectory of "the dark's" young life; from graffiti-inspired street urchin to the welcome arms of one of Vancouver's pre-eminent art galleries.
The epic pieces previewed on the gallery walls at his opening show, some as large as nine by twelve feet, were in direct contrast to the notion of the binder-art that was the start of this unschooled artist. The fact that he has been so well-schooled in social graces will stand him in good stead as his career will so inevitably lead him to more and greater successes.
My fifteen year-old daughter, who was fully informed about "the dark," jumped at the opportunity to see one of her hero's work and was my escort as well as a great source of knowledge for the evening.
She asked, "How did you end up here from there?" He got it – I didn't. His reply was, "those three pieces over there," referring to three enormous works lining the gallery walls. "Mr. Lederer, [the ever-gracious gallery owner Ted Lederer], came into my studio and liked them." And well he should have.
Primarily using intricately manipulated stencils, sometimes as many as fifteen, aerosols are applied to canvas, and acrylics to panels - in many layers. The overall tone is a sombre one. The subject matter, sometimes as mundane as a back alley, nonetheless provokes the eye to appreciate the vision for its simplicity and stark realism. Not sure at first, whether you are looking at a photograph, upon closer inspection one sees the work of the stencils at play.
It is a unique and labour-intensive art form and this young street artist has no doubt used many an urban slate upon which to perfect his craft. Far from any egalitarian assertion common to graffiti, "the dark" offers that he "tries to represent reality through his work." It is not abstruse. It is simply, what it is.
Shown in its entirety, "the dark's" collection of work definitively and, in the positive, answers the question, "yes, but is it art?"

"the dark" Dystopia is at the Elliott Louis Gallery January 11 through January 28.