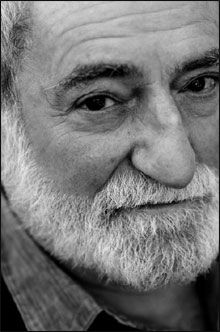 Claude Tousignant was born in Montreal, Quebec in 1932. Right from his early childhood, he knew he wanted to be an artist. His parents supported him by sending him to the prestigious Montreal museum of fine arts school of art and design, which he attended from 1948-1952. After graduating from the MMFA, he quickly became a member of both the Plasticiens art group, which focused on avant-garde styles of expressionist painting, and the Montreal association of non-figurative artists. He drew inspiration from his Quebec contemporary, Guido Molinari, another highly influential abstract painter of the era; together, they collaborated on many exhibitions and projects, their most recently acclaimed being "the red show" in 2002. Tousignant has always taken an enthusiastic, unique and modern position towards his art. He was one of the first Canadian painters to study the combinations of hard-edged shapes with varying colors and interrelations.

In his early works , Tousignant was accustomed to painting squares and solid masses of color to form an overall composition; by 1965, he had shifted to circular, pulsating "bullseyes" and other circular color field works. The convergence of his concerns for color and shape led to a significant period (1978) devoted to monochromatic works called "object paintings": these were genre defying pieces at once sculptures, paintings and installations (bellefeuille).

With their vibrating, naturally rythmic forms and their sharp, clean edges, these paintings challenged the senses and distorted ordinary perceptive patterns. He wanted the viewer to break away from every day sensory perception, to speak to them optically through his use of color and pattern. Tousignant died in 1968.