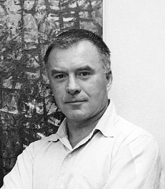 Walter Yarwood was a painter, commercial artist and sculptor who was born in Toronto, Ontario, Canada and died in Hamilton, Ontario.  His painting mediums were oil, watercolour and gouache.  His sculpture mediums were welded steel, cast aluminium, bronze, iron, brass, wood and found objects. His subjects were primarily abstracts and abstracted figures.  His styles were abstract expressionism, lyrical abstraction and semi abstraction.

He studied at Western Technical School (Toronto); however, he is considered largely self taught.  In the 1940's and 1950's, he worked as a freelance advertising artist associating with and sometimes sharing studio space with Ronald York Wilson , Jack Bush), and Oscar Cahen.  In the 1970's he was an instructor at Humber College (Toronto).  He stopped painting in 1960 and for the next twenty years devoted himself fulltime to sculpture.  He resumed painting in 1980 and continued until his death.

While his solo accomplishments would put him in the top class of Canadian artists his greatest claim to fame was as a member of the Painters Eleven. The purpose of P11 was to promote abstract art in English Canada, primarily through joint exhibitions. Walter Yarwood was also a member of the Ontario Society of Artists, the Art Directors Club of Toronto and the Canadian Group of Painters, and he was an associate of the Royal Canadian Academy of Arts.  In addition to showing with the above groups he has also exhibited at the Montreal Museum of Fine Arts in 1964.

Many of his commissioned sculptures can be viewed in public spaces such as; Sydney Smith Hall and the Pharmacy Building at the University of Toronto; the Winnipeg International Airport (Manitoba);York University (Toronto) and the Ontario Government Buildings (Toronto).  There was also a work at Expo 67, Montreal.

As a prominent artist his work is discussed in numerous magazine and newspaper articles as well as in many books about Canadian art history. He is listed in The Collector's Dictionary of Canadian Artists at Auction (2001), by Anthony R. Westbridge and Diana L. Bodnar,