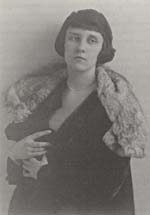 1896-1947 Efa Prudence Heward, was born in Montreal. She was a founding member of the Canadian group of Painters, 1933 and she died while visiting California. A painter of figures, landscape, and still life, she worked in Montreal, the Laurentian Hills, the Eastern Townships of Quebec, on the St Lawrence near Brockville, and in Bermuda.

The sixth of eight children in a prosperous Montreal family, Efa Prudence Heward studied at the Art Association of Montreal with William Brymner, and for two summers with Maurice Cullen, sketching at Phillipsburg and Carillon. She exhibited her first work at the Art Association of Montreal Spring Exhibition in 1914. During the First World War, she and her mother worked with the Red Cross in London, England and following the war she continued her studies in Montreal with Randolph Hewton. She went to Paris to study at the Colarossi and in 1920 she returned to Montreal and joined the Beaver Hall Hill artists. She specialized in portrait and figure paintings. She won first prize for "Girl on a Hill" at the Willingdon Arts Competition in 1929. In 1932 she had an exhibition at the galleries of W.W. Scott and Sons in Montreal, and again in 1934 with Sarah Robertson and Isabel McLaughlin. She was a member of the Canadian Group of Painters (1933; co-founder) and the Contemporary Arts Society (1939; founding member). A memorial exhibition was held at the National Gallery of Canada in 1948 and toured Canada.