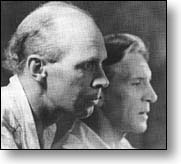 1890-1956 Painter, draughtsman, printmaker, watercolourist. Lionel LeMoine FitzGerald, born in Winnipeg. In his youth he spent the summers on a farm at Snowflake, Manitoba. Studied at the A. S. Keszthelyi's school of art, Winnipeg, then worked in a publishing house and at displays and interior decoration. Spent a winter (1921) in New York, studying at the Art Students League with Kenneth Hayes Miller and Boardroom Robinson. Taught at the Winnipeg School of Art from 1924; principal, 1929-1949. Member of the Group of Seven, 1932-1933, and founding member of the C.G.P. in 1933. Visited the West Coast several times between 1942 and 1949 and Mexico in 1951. LL.D (Manitoba) in 1952. Died in Winnipeg. Painter and draughtsman. His most characteristic subjects were prairie landscapes and Winnipeg houses, and still life.